Well, after 117 elementary/middle grade speculative titles, I can say that being away from this blog has not been boring! My fellow CYBILS 2018 round one judges and I have narrowed the 117 down to 7 (no easy task!) and our picks were announced on January 1 (as is tradition). 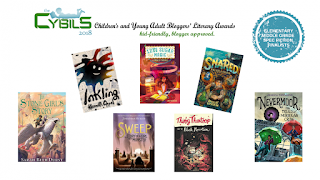 Nevermoor: The Trials of Morrigan Crow
by Jessica Townsend
Snared: Escape to the Above by Adam Jay Epstein
Sweep: The Story of a Girl and her Monster by Jonathan Auxier
The Stone Gil's Story by Sarah Beth Durst
Thisby Thestoop and the Black Mountain by Zac Gorman

I was so thrilled to be back judging for the CYBILS
after a few years off while I was completing that pesky doctorate. I have always been a round one judge as I cannot imagine what it must be like to pick JUST ONE of those seven. Without giving too much away, my PERSONAL favorite book of 2018 is in that pile, but as someone who recommends children's literature to kids, parents, and teachers, my PERSONAL favorite is not what the CYBILS is about at all. This was my fourth year serving and I can attest that the judges take their job VERY seriously, spending hours discussing which books should represent both wide kid appeal and literary merit. A lot of our discussions center around which kids will like which books as well as the literary themes, plotting, characterizations, etc... Again, we take this quite seriously for a bunch of volunteers!

That being said, there were a few titles fighting to get on the list - at least I was considering them in the top - and I think they deserve a mention too! I will TRY to write more about each of them in the coming weeks, but in the meantime, here are a few that stood out:

Bone's Gift by Angie Smibert - For older readers who like a little mystery and paranormal in their historical fiction reading,  Bone's Gift is a nuanced tale where a young girl discovers that the Gift she has inherited may have killed her mother. History, a special Gift, a mystery.... there's a lot packed into this fine telling that will keep readers intrigued.

The Truth About Martians

by Melissa Savage - This story begins as a simple tale of three kids on an adventure to find a crashed Martian ship out in their New Mexico desert town during the Roswell incident era, but the simple adventure soon reveals deeper themes of family and community. Plus, I'm always a sucker for books in simpler times when kids could wander and investigate their world (even worlds with aliens in the backyard!).

by Emily Whitman - This story about a young half-selkie kept haunting me after I read it. So atmospheric and full of longing with themes on  identity and coming-of-age that are made even stronger by the writer's ability to impart the selkie's need for belonging in both worlds. Kids who struggle with identity would find much to love in this title.

The Adventures of a Girl Called Bicycle

by Christina Uss is a quirky adventure about a girl who takes off on her beloved bicycle to meet her idol, a famous cyclist. As if taking off cross country on a bicycle at 12 and being raised by eccentric people in a monastery aren't enough to make this title quirky.... the real quirk is the ghostly hitchhiker that helps her learn not only about the USA she crosses, but herself as well.

by Katherine Applegate. Everyone knows I lADORE this author's books and perhaps I was a bit jaded, but I had really hoped that this one would make our list. Endling: The Last is a series start centered around extinction in a world that does not value its diversity. The story has some darker themes and sadness in it, especially for the younger end of the age range, but it's also the start to a fantastic adventure world I cannot wait to read more about in the next - Endling 2: The First

.  probably my 2nd favorite title of 2018 (again, I can't reveal my favorite until the Valentine's Day announced winner :-)

by J.A. White brings modern-day creepy to the Hansel & Gretel and Scheherazade stories with a boy imprisoned by a witch only alive as long as he can write her a story each day. Interwoven with the strong telling, are great writing tips and advice for young writers.

Your group did pick some excellent books for us round two judges! I am having a blast reading them all. Nightbooks and The Turning are also on my TBR. I'll have to check out Bone's Gift!

Loved SWEEP. I also recommend some new to me authors: CM Surrisi's A SIDE OF SABOTAGE and Matthew Swanson/ Robbi Behr's series beginning with THE REAL MCCOYS.