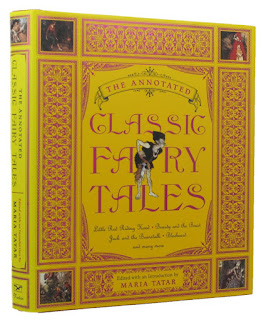 by Maria Tatar for some time. I thumbed through the entire Norton series of annotated tales (Grimm’s, Anderson’s, etc…) in Barnes & Noble, but I’d not taken the time to really see if it was a good anthology. It’s not a good anthology; it’s a great one.
Illustration by Kay Nielsen (1914) from Hansel & Gretel

Illustration by Arthur Rackham (1918) from Jack and the Beanstalk


Ms. Tatar’s introduction, annotations, and illustration inclusions are marvelous. It may well be argued that The Annotated Classic Fairy Tales is the definitive source covering the most common traditional European tales. Tatar has included a good mix of Grimm, Perrault and Anderson as well as a few lesser-known fairy tale authors. She provides a brief overview on the oral history of story telling and a well-considered introduction. Each of the twenty-six fairy tales has strong annotations and a large variety of artwork. Her annotations discuss themes, motivations and various changes to the tales as well as the tale's origins and cultural context. The appendices include brief biographies for both the authors and illustrators.

The introduction is especially thought provoking, illustrating the impact fairy tales have in shaping our lives and culture. The importance of fairy tales to the child’s development can perhaps be no easier understood than by the work of the controversial Bruno Bettelheim in his book, The Uses of Enchantment. Tatar, of course, quotes from Bettelheim saying that fairy tales serve to teach children that, “a struggle against severe difficulties in life is unavoidable …one masters all obstacles and at the end emerges victorious.” It’s a good quote to illustrate her point that fairy tales are of enumerable psychological value to the developing person.

Illustration by Arthur Rackham (1932) from The Emperor's New Clothes

Illustration by Edmund Dulac (1911) from The Princess & the Pea


Tatar speaks of how returning to fairy tales returns, “a rush of childhood memories and experiences.” For me, this is not the case. I’ve no childhood memories of pixies and magic to pull forward, but I now read fairy tales voraciously in hope that some glimmer will shine. The first fairy tale I recall admiring is Rapunzel. In considering why I remember Rapunzel more fondly, I came across Ms. Tatar’s assessment of Rapunzel as being a, “prisoner in a tower that lacks both a stairs and an exit.” These sort of wide-view observations provide countless opportunities for reflection.

Illustration by Kay Nielsen (1925) from Rapunzel

Illustration by Jennie Harbour (1932) from The Little Mermaid

by by Maria Tater is highly recommended for lovers of all classic stories, fairy tale enthusiasts and those interested in possible insights into the mind of the developing child.

Illustration by Arthur Rackham (1932) from Cinderella

Illustration by Maxfield Parrish (1913) from Puss In Boots