A bunch of books that I want. Just sayin' 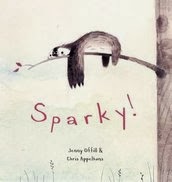 Sparky by Jenny Offill with illustrations by Chris Appelhans
Publishers synopsis: "Sparky stars a pet who has more to offer than meets the eye. When our narrator orders a sloth through the mail, the creature that arrives isn't good at tricks or hide-and-seek . . . or much of anything. Still, there's something about Sparky that is irresistible."
My thoughts:  Love the 'retro' look of the illustrations, think it sounds funny :-)
Available March 11, 2014 / 40 pages /Picture Book / ISBN: 978-0-375-87023-1

A Snicker of Magic by Natalie Lloyd (debut author alert!)


Publisher's Synopsis: "Midnight Gulch used to be a magical place, a town where people could sing up thunderstorms and dance up sunflowers. But that was long ago, before a curse drove the magic away. Twelve-year-old Felicity knows all about things like that; her nomadic mother is cursed with a wandering heart.

The Mark of the Dragonfly

by Jaleigh Johnson. I HAVE my hands on this one and just need TIME!
Publisher's Synopsis: "Piper has never seen the Mark of the Dragonfly until she finds the girl amid the wreckage of a caravan in the Meteor Fields.  The girl doesn't remember a thing about her life, but the intricate tattoo on her arm is proof that she's from the Dragonfly Territories and that she's protected by the king. Which means a reward for Piper if she can get the girl home.  The one sure way to the Territories is the 401, a great old beauty of a train. But a ticket costs more coin than Piper could make in a year. And stowing away is a difficult prospect--everyone knows that getting past the peculiar green-eyed boy who stands guard is nearly impossible.  Life for Piper just turned dangerous. A little bit magical. And very exciting, if she can manage to survive the journey." Available March 2014 / 400 pages / Middle Grade Fiction / ISBN-13: 978-0385376150

by Marisa de los Santos
Publisher: "Perfect for fans of Margaret Peterson Haddix, When You Reach Me, and Savvy, this charming time-travel story from husband-and-wife team Marisa de los Santos and David Teague follows one girl's race to change the past in order to save her father's future.

Thirteen-year-old Margaret knows her father is innocent, but that doesn't stop the cruel Judge Biggs from sentencing him to death. Margaret is determined to save her dad, even if it means using her family's secret—and forbidden—ability to time travel. With the help of her best friend, Charlie, and his grandpa Josh, Margaret goes back to a time when Judge Biggs was a young boy and tries to prevent the chain of events that transformed him into a corrupt, jaded man. But with the forces of history working against her, will Margaret be able to change the past? Or will she be pushed back to a present in which her father is still doomed?Told in alternating voices between Margaret and Josh, this heartwarming story shows that sometimes the forces of good need a little extra help to triumph over the forces of evil." Available April 29, 2014 / 288 pages / Middle Grade / ISBN-13: 978-0062274625
My thoughts: Well, it's compared to two of my favorite books so how can I resist?

Boxers & Saints by Gene Luen Yang
Publisher's Synopsis: In two volumes, Boxers & Saints tells two parallel stories. The first is of Little Bao, a Chinese peasant boy whose village is abused and plundered by Westerners claiming the role of missionaries. Little Bao, inspired by visions of the Chinese gods, joins a violent uprising against the Western interlopers. Against all odds, their grass-roots rebellion is successful.
But in the second volume, Yang lays out the opposite side of the conflict. A girl whose village has no place for her is taken in by Christian missionaries and finds, for the first time, a home with them. As the Boxer Rebellion gains momentum, Vibiana must decide whether to abandon her Christian friends or to commit herself fully to Christianity.
Boxers & Saints is one of the most ambitious graphic novels First Second has ever published. It offers a penetrating insight into not only one of the most controversial episodes of modern Chinese history, but into the very core of our human nature. Gene Luen Yang is rightly called a master of the comics form, and this book will cement that reputation. One of the greatest comics storytellers alive brings all his formidable talents to bear in this astonishing new work. Available now/ 512 pages/ 7th grade & up/ ISBN-13: 978-1596439245
My thoughts: I suppose I should want these since they won School Library Journals Battle of the Books. Haven't really wanted it, but with all the buzz (National Book Award finalist too!), I can't help but be intrigued...

At the Same Moment, Around the World

by Clotilde Perrin
Publisher's Synopsis: Discover Benedict drinking hot chocolate in Paris, France; Mitko chasing the school bus in Sofia, Bulgaria; and Khanh having a little nap in Hanoi, Vietnam! Clotilde Perrin takes readers eastward from the Greenwich meridian, from day to night, with each page portraying one of (the original) 24 time zones. Strong back matter empowers readers to learn about the history of timekeeping and time zones, and to explore where each of the characters lives on the world map. A distinctive educational tool, this picture book's warm, unique illustrations also make it a joy to read aloud and admire. Available March 2014 / 36 pages/ Picture Book for little guys/  ISBN-13: 978-1452122083

My thoughts:  This looks like one of those eloquent books that always make me hold my breath as I read them. The illustrations look amazing. Reminds me of All the World

Poached by Stuart Gibbs
Publisher's Synopsis: Teddy Fitzroy’s back for another zoo mystery—this time it’s a koala caper—in this action-packed follow-up to Belly Up, which Kirkus Reviews called “great fun.”
School troublemaker Vance Jessup thinks Teddy Fitzroy’s home at FunJungle, a state-of-the-art zoo and theme park, is the perfect place for a cruel prank. Vance bullies Teddy into his scheme, but the plan goes terribly awry.
Teddy sneaks into the koala exhibit to hide out until the chaos dies down. But when the koala goes missing, Teddy is the only person caught on camera entering and exiting the exhibit.
Teddy didn’t commit the crime—but if he can’t find the real culprit, he’ll be sent to juvie as a convicted koala-napper. Available April 2014/ 336 pages/ Middle Grades/ ISBN-13: 978-1442467774
My thoughts: Poached is the follow up to Belly Up

We Were Liars by e. lockhart
Publisher's Synopsis: A beautiful and distinguished family.
A private island.
A brilliant, damaged girl; a passionate, political boy.
A group of four friends—the Liars—whose friendship turns destructive.
A revolution. An accident. A secret.
Lies upon lies.
True love.
The truth.
We Were Liars is a modern, sophisticated suspense novel from National Book Award finalist and Printz Award honoree E. Lockhart.  Read it. And if anyone asks you how it ends, just LIE.  Available May 2014/ 240 pages/ Young Adult/ ISBN-13: 978-0385741262
My thoughts: EVERYONE is talking about this book. It's everywhere I look! It will be one of those bandwagon books that I will be late for. Grrr. 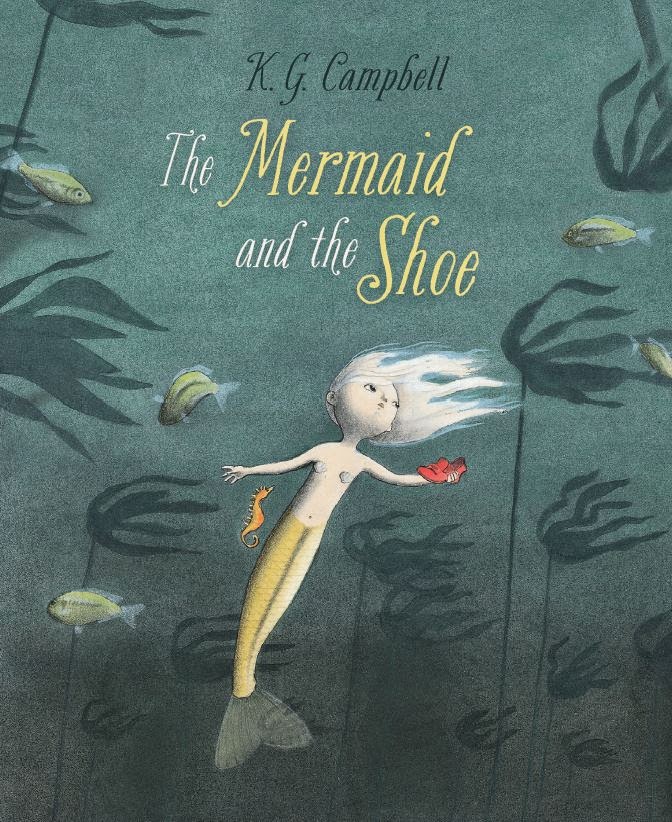 The Mermaid and the Shoe by K.G. Campbell
Publisher's Synopsis: Each of King Neptune's 50 mermaid daughters boasts a special talent, except for little Minnow, who seems to be good only at asking questions. When she finds a strange object, Minnow follows her questions to a wondrous place and finds answers, including the answer to the most important question of all: Who am I? A gorgeously illustrated story about finding one's purpose. Available now/ 32 pages/ Picture Book/ ISBN-13: 978-1554537716My thoughts: Don't know much about the story, but the cover art is just so inviting; I have to turn that page!

This is the truth. This is history.
It’s the end of the world. And nobody knows anything about it.


You know what I mean.
Funny, intense, complex, and brave,Grasshopper Jungle brilliantly weaves together everything from testicle-dissolving genetically modified corn to the struggles of recession-era, small-town America in this groundbreaking coming-of-age stunner."
Available now/ 432 pages / Young Adult / ISBN-13: 978-0525426035