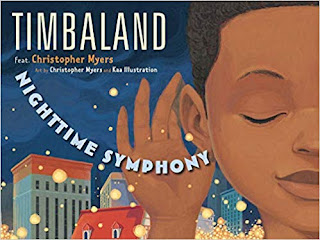 Publisher's Synopsis: "The sounds of the city at night create a lively lullaby in this melodious bedtime story from superstar producer and musician Timbaland, Caldecott Honor–winning illustrator Christopher Myers, and Kaa Illustration!
As a little boy gets ready for bed, the sounds of a wild storm echo around him, lulling him to sleep. From the crash of thunder to the pitter-patter of raindrops to the beat of passing cars, the music of the city creates a cozy bedtime soundtrack."

is more than another sweet, lyrical bedtime story, it is an ode to fatherhood.
Written by Grammy award-winning musician Timbaland, the musical cadence and rhyme of Nighttime Symphony

is spoken as sweet sentiment by a father explaining the rumblings of a city storm as be helps his son to bed. By comparing the weather's sounds to melodious expressions, the narrator father helps his young son to not only squelch his fear, but to embrace the wonders of the city sounds.

That being said, Nighttime Symphony

still works best as a lovely bedtime story. Rhyme schemes are not conducive for explicit ELA instruction and classroom applications are minimal.  Some comparisons are possible discussion points, but the book is meant to be more artistic than instructive.  Library purchase for diversity and read-alouds recommended.

Themes: Fear and Beauty of Sounds/Storms, Fatherly Love
Characters: The characters seem a bit inconsequential to the telling, with the father doing all the telling and the boy doing all the listening.
Plot: Poetic rendering of boy getting more comfortable with storm sounds due to father's explanations
Originality: Anchored in urban space, colorful illustrations, sweet comparisons of sounds to music
Diversity: Black father/son positive representation, City setting & sounds


Timbaland is a Grammy Award–winning musician. He has collaborated with many well-known musicians (Justin Timberlake, Madonna, One Republic, Beyoncé, Missy Elliott, etc.). He is also the producer for the TV series Empire.
Nighttime Symphony

is his first book for children.

Illustrations by Christopher Myers, an award-winning author and illustrator of children’s books. He won a Caldecott Honor for his illustrations in the book Harlem

Illustrations also Kaa Illustration Studio, comprised of illustrators Phung Nguyen Quang and Huynh Kim Lien, and based in Ho Chi Minh City Their stunning, vibrant illustrations are inspired by the folk culture of Vietnam and Asia. You can see more about them HERE.