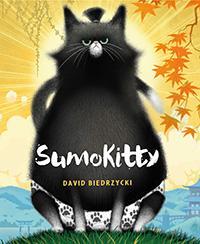 “Fall down seven times; get up eight” is one of many witty quotes that highlight the central theme of SumoKitty

written and illustrated by David Biedrzycki. Written as an ode to tenacity, SumoKitty

is both witty and instructive for young folks facing adversity. The humor is subtle, played out through a big, strong sumo wrestler being afraid of mice while his friend, the Kitty, gets a little too comfortable, forgetting the job of a cat.

Between humor and wit, SumoKitty

is a tale completely filled with new vocabulary opportunities, both English and Japanese. Children will love learning all the Japanese sumo wrestling terms while expanding their English vocabulary. Contractions are a prominent feature within the written structure and offer older children a chance to practice their usage.

is expressively illustrated with subtle watercolor strokes and funny facial renderings. All in all, SumoKitty

is a fantastic new addition to your picture book collection.

Recommended for both elementary classroom and library purchase. This one is going to be a popular and fun read for children. See standards & teaching ideas below...
-----------------------------------------------
Publisher’s Synopsis: "Watch out, mice! This cat is a sumo champion! A stray kitty gets a job in a sumo stable, chasing mice in exchange for food. But when eating like a sumo wrestler slows our feline hero down, he realizes he must train like a wrestler, too. Through hard work and perseverance–and with a little help from a big buddy–SumoKitty is born! A funny and heartwarming story inspired by the Japanese saying “Fall down seven times, stand up eight.”
Genre: Picture Book, Animal Tales
Ages: 5 - 8
Pages: 48
Date: August 13, 2019
ISBN: 978-1-58089-682-5
Thank You to Charlesbridge Publishing for my advanced copy!
Themes: Tenacity, Friendship, Work Ethic
Characterization: SumoKittty and his pals, especially mouse-fearing Kuma, are delightfully rendered with both a reverence for their sport and a solid touch of humanness that makes this both a multicultural delight as well as a simple story of friendship.
Plot: Will SumoKitty be able to rise to the occasion and defeat his opponent(s)? Will Kuma? Originality: Terrifically original, allowing both the sport of sumo wrestling to shine while telling the story of a stray cat finding friends and a wrestler rising to his challenge.
Believability: SumoKitty is fully realized and grounded in the real-life sport of sumo wrestling
Diversity: Japanese sumo wrestling, and the disciplinary vocabulary of that sport, grounds the tale in believability as well as giving other cultures a look at an important part in Japanese culture. Wrestlers are not caricatures, but depicted as serious athletes, competitors, and friends.
-----------------------------------------------
Teaching Ideas:
Vocabulary Standard: CCSS.ELA-LITERACY.L.2.4 Determine or clarify the meaning of unknown and multiple-meaning words and phrases based on grade 2 reading and content, choosing flexibly from an array of strategies. CCSS.ELA-LITERACY.L.2.5.A Identify real-life connections between words and their use

Grammar Standard: CCSS.ELA-LITERACY.L.2.2  Demonstrate command of the conventions of standard English capitalization, punctuation, and spelling when writing. CCSS.ELA LITERACY.L.2.2.C  Use an apostrophe to form contractions and frequently occurring possessives.

Comprehension Questions:
(chronologically, though second grade example, can be reworked to grades K-3 with anchor standards)

1. Okamisan is ready to throw the kitty out, but she hears something and does not throw the kitty out. What does she hear and why does that sound allow the kitty to stay in the heya? (she hears a mouse and gives Kitty a job getting rid of the mice in the heya, especially because Kuma is afraid of mice) (CCSS.ELA-LITERACY.RL.2.7 Use information gained from the illustrations and words in a print or digital text to demonstrate understanding of its characters, setting, or plot.)

2. Why does Kitty lose his job? (he grew fat & lazy) (CCSS.ELA-LITERACY.RL.2.3 Describe how characters in a story respond to major events and challenges.)

3. How does Kitty become SumoKitty? (he trains hard and gets rid of all the mice so the sumo wrestlers make him a mawashi and call him SumoKitty) (CCSS.ELA-LITERACY.RL.2.3 Describe how characters in a story respond to major events and challenges.)


4. Why do you think the yokozuna had mice sewn onto his mawashi? (to try to scare Kuma) (CCSS.ELA-LITERACY.RL.2.7 Use information gained from the illustrations and words in a print or digital text to demonstrate understanding of its characters, setting, or plot.)

5. What does, “fall down seven times, get up eight” mean? (CCSS.ELA-LITERACY.RL.2.2 Recount stories, including fables and folktales from diverse cultures, and determine their central message, lesson, or moral.)

You can buy this fabulous book here:


Share the trailer with your students/children to get them excited about the book:

About the author/illustrator (from the publisher): "David Biedrzycki is the author and illustrator of the Breaking News series, the Ace Lacewing, Bug Detective series, and the Me and My Dragon series. He has been creating illustrations for book publishers, advertising agencies, magazines, and design firms since 1980. His art has graced the cover of KidSoft magazine, New England Aquarium billboards and children's software packaging, such as "The Amazon Trail" and "Odell Down Under." David has collaborated with children's author Jerry Pallotta on The Beetle Alphabet Book, The Boat Alphabet Book, and The Freshwater Alphabet Book. He grew up in Pennsylvania and now lives in Massachusetts with his wife and three children." Read more about him HERE.