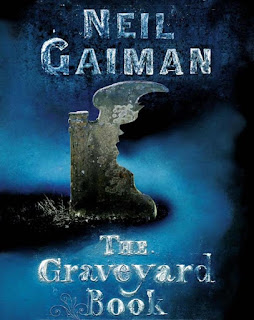 is bittersweet and melancholy. Not words one would associate with a horror novel. But, make no mistake, The Graveyard Book

is a horror tale. It begins with a triple homicide committed by the aptly named Jack, who wields a bloody, ripping knife. Jack, upon finishing off a father, mother and daughter, chases the surviving toddler into a graveyard. There, the toddler will live and thrive, thanks to the kindly spirits and various monsters, beasts and demons that inhabit the graveyard. They will name the toddler Nobody, Bod for short, and he will walk a unique path from boyhood to manhood. He will learn important skills that only dead men tell and the graveyard will protect him from Jack who still hungers for his blood.

is a coming-of-age tale that invites obvious comparisons to Kipling's Jungle Book tales. But it's also unique in the way Gaiman manages to convey horror with enchantment, terror with melancholy. Instead of fearing the dead, we love them (and the undead aren't too shabby either). My only exception with the novel is a slight plodding middle, which could be the result of my own desire to see Bod to adulthood, and which would probably be less pronounced if I were using this as a read-aloud.

I'm in awe of Gaiman's craft and continually try to grasp his brilliance. There’s an inside joke running through all his fiction. He’s the cool kid and you want in on the secret. When I consider my favorite authors, I see a pattern of two things: they create memorable characters and put them in situations outside of reality. They don’t write pure science fiction or fantasy, though Gaiman lingers close to this; they write at the very edge of reality. Their worlds seem like a place I’ve been or want to be. Their characters are people I want to know, that I already love.

You will grow to love Bod and his graveyard family and hope that a sequel is walking about in Mr. Gaiman's head.


Genre: Fantasy. Age: All - Read aloud for young or as an independent read for all ages


Neil Gaiman explains how he came up with the idea for The Graveyard Book:

Neil Gaiman's resume is way too long to be included here. Should I tell you that he writes prose or poetry, that his stories have been successful on film, that he was once a journalist, that he wrote some of the most beloved comics of all time, what about his song lyrics or dramas? How do I write a bio for a man whose Twitter account states that he, "will eventually grow up and get a real job. Until then, will keep making things up and writing them down." You can read more on his website, sign up to follow him on author tracker, spend an hour perusing his wiki entry, read a bit about his personal life on his blog or laugh with him as he tweets away.