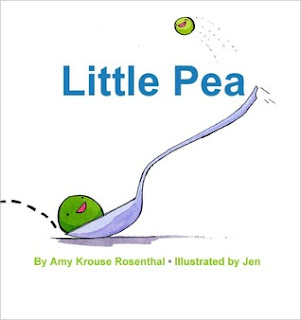 Little Pea was a finicky eater.

And now Little Oink is worried about cleaning up his mess.

Amy Krouse Rosenthal has a sure knack for twisting childhood dilemmas into teachable moments without being preachy, a difficult task when writing for children and especially in stories with firm moralistic implications. The understated smartness is further enhanced by the subtle and whimsical illustrations by Jen Corace.


Cute picture books. Fantastic word play. Teachers & parents with children in the 2-6 age range would do well to add these books to their collections.

Little Books Site via Chronicle Books filled with all sorts of fun stuff!

Author Podcast on The Land of Nod HERE

Amy Krouse Rosenthal like penguins, potato chips and yoga (not to be confused with yogurt). You can learn more on her blog or on the Chronicle Books site.

Illustrator Jen Corace has a thing for bumper cars and toast. You can learn more about her on her website or on the Chronicle Books site.

Though it just about tells the whole story, here's the book trailer:

As an added bonus, the Chronicle Books website for the series is having a contest worth $2,500! (You can also find all sorts of great information)

Go to the site: HERE 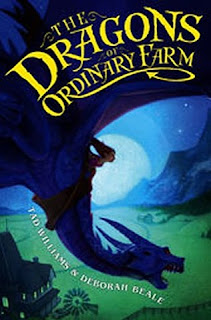 There’s been more than a fair amount of dragon tales for children so when I picked up The Dragons of Ordinary Farm,

has a unique premise that sets it apart from the rest. It might have been better titled The Creatures of Ordinary Farm.

Tyler & Lucinda are none too thrilled to be shipped off to their long lost uncle’s farm for the summer while their mother’s off concentrating on her dating life. But Ordinary Farm is no ordinary farm and the siblings soon realize their summer will be more than just baling hay and milking cows. It seems there be dragons, and lots of other fantastical creatures, crossing over into our world from a secret portal located on Ordinary Farm.

The Dragons of Ordinary Farm

is an original story, dotted with interesting characters. The beginning chapters introduce a motley crew from distant parts of the world with odd stories that don’t quite seem to gel. The foreshadowing is abundant and pulls us along as we attempt to figure out what all the many characters might be. Young Colin is especially intriguing and sets up a possible romantic match for pre-teen Lucinda. However, the most perplexing character is Uncle Gideon himself. Is he crazy, mean or just a grief stricken widow?

Though The Dragons of Ordinary Farm

is filled with interesting characters and an ending that really packs a wallop, I do have a couple tiny criticisms. The first few chapters work well, but once the kids get to Ordinary Farm, the set-up takes a bit too long. Rumor has it that this is a five part series so I’m thinking this might just be character/world building. However, considering the targeted age group, we need to get to the action faster (I guess I should have been an editor, because this sort of thing drives me mad). I feel simplistically compelled to also add that I like the other covers sooooo much better. The US cover is really misleading (as was the title for that matter). If you get a student who begins to lag about a third of the way in, tell him it gets better really soon!

All in all, The Dragons of Ordinary Farm

is a worthy addition for students interested in fantasy and/or action-adventure stories. The fantasy reader will be held rapt and the action-adventure reader reader will find lots to like too. The ending really packs a wallop and leaves enough room for a sequel or five.

Tad Williams and Deborah Beale live in the San Francisco area with their children and lots of pets. Deborah is originally from London where she was a children's book editor. You can read more about lots of other fantasy books by Tad Williams on his website: HERE.

is HUGE. He’s all over Europe with a television series, a play and famous people like Miranda Richardson loving him up. But here, we Yanks have missed out on his mania. Not so anymore! Horrid Henry

has jumped the pond and if you have or teach children in the young independent reader age group, you’re going to want to check Henry out.

Make no mistake, Henry is Horrible and author Francesca Simon makes no apologies for him. It’s that unapologetic horribleness that allows the reader to escape into a world of naughty without really being naughty themselves (my favorite sort of escape!). There will be no need for moralistic discussion as kids will cover their mouths, giggle and offer their own ideas as to why Henry’s made some mistakes. Francesca Simon's style certainly leans toward a Roald Dahl

slant, and this is further amplified by the Quentin Blake inspired illustrations of Tony Ross, but there could be a lot worse comparisons for an author or an illustrator!

as much as their European counterparts.

Recommended for classrooms & libraries serving students in grades 1-4 and those students at the early independent short-chapter level.

And a Horrid Henry game site!

A list of all the Horrid Henry titles here!

And here's an opening clip from the television show: