Banned Books Week: How Harry Potter Brought the Devil into My Classroom 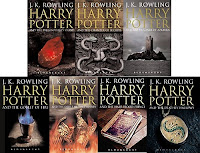 Anyone who has read this blog, even a little, knows my adoration for the Harry Potter books. But LOTS of people adore those books (duh). My Harry Potter story is a bit different. Although I adore the books as a reader, my true adoration lies within the joy they brought to my students back in 1999, 2000 and 2001. My adoration began before the MANIA, before nary a toy or movie, before Harry Potter hysteria took over.

My story is that of a sixth grade reading and language arts teacher whose PTSA offered to buy her classroom sets of books. Ever frugal, it just so happened that Harry Potter and the Sorcerer's Stone

was the Scholastic Books ninety-nine cent selection that month. I knew it was getting some 'buzz,' but honestly, I hadn't paid that much attention. I borrowed a copy from our school library, took it home, and read it, in one night, showing up to work exhausted but certain of my PTSA book selection.

Copy in hand, I set forth in pulling all the sixth grade literary standards and wrote a unit (should've sold that!) so that when the Harry Potter and the Sorcerer's Stone

books arrived, I was ready. At this point in my career, about five years in, I was pretty certain the students would like the book and my newly planned unit would be both effective and engaging. I was wrong. The students didn't like the book, they loved the book. Engagement? They ran from their previous class to get to my classroom, grabbed their copy before the bell rang, and hunkered down happily in their seats. When I would make them close the cover in order to try to teach a lesson, they would moan, "Just let us read!" They were possessed all right. All of them - not just the strong readers, but the struggling readers too, the kids who had never read a whole book before, the kids who read on a first grade level. My job, using Harry Potter and the Sorcerer's Stone

as the template to teach reading and writing skills, was a cakewalk. The second year, I got my hands on the fabulous Grammy winning audio version by Jim Dale. When I would press pause, to try to teach something, teach anything, the students would revolt!  I still get students, to this day almost twenty years later, who contact me and tell me how I led them down the road to lifelong reading because of that book (well, me and J.K. Rowling).

But that's just the prelude to this tale....... how the Devil joined my classroom. You see, this is Banned Books Week; and eventually, I had to quit teaching Harry Potter and the Sorcerer's Stone

. I taught in an affluent, urban area with well-educated parents and still, every year, I had a handful of parents who complained to the principal and I would then have to provide an alternate unit for those students (her solution). I typically gave them Shiloh and a packet of worksheets, sneaking moments to teach them while the rest of the class was enthralled with Harry & Co.

In 2001, right before the movie came out, all things Harry Potter verged at mainstream hysteria and two parents asked to excuse their children from my classroom. The first parent simply asked and was granted, never even meeting with me. Had we met, I would have asked them if they'd let their child read the likes of fairy tales or if they would please read the story first before they made the decision (two had changed their mind after reading it in past years). But this year, with all the mania surrounding it, I had one parent who wasn't only worried about his own son's soul, but also the souls of the other 100+ kids that I was teaching.

The first meeting with this gentleman was facilitated by the principal since I spoke very, very little Spanish, he spoke very, very little English and she spoke both well. The meeting was typical of year's past: she backed me, told him that his son would get a quality literary unit built around Shiloh, and though he argued a little, he had left somewhat appeased. I thought.

I made extra sure his son met with me individually to discuss his lessons - not because a complaining parent should garner more attention from any other student - but because his son was severely struggling in reading and needed a lot of attention. I think Shiloh is now, Common Core considered, a third grade title and even as a sixth grade student, he was barely able to read it, let alone complete the assignments without the support of classroom discussion and partner scaffolding.

One bright Florida morning I arrived to his father standing at my door, pensively waiting for me. In broken versions of Spanglish we both attempted to discuss an article, printed from the internet, that his pastor had given him. He was imploring me that the article told of demonic possessions, that he could not let me teach that book at his son's school, that his pastor had told him that he had to save all the children, not just his son. I took the offered article respectfully, but before I had a chance to even read it, I noticed the url at the very bottom. It began: www.theonion.com (source link). I was not very good at explaining anything in Spanish, but try explaining "parody" and "irony" and "farce" to someone whose pastor had told him that he had an obligation to save all the children from Satan himself!

Luckily, the students started arriving and I asked the gentleman to please head up to the principal to continue the discussion. He was a nice man, he left quietly. But that afternoon, when the principal asked to see me, I knew that would be the last year that I would be using Harry Potter and the Sorcerer's Stone

as a teaching tool. It was fine. The movie came out and I typically don't teach literature with a movie tied to it, especially a blockbuster. But, the Devil had showed up in my classroom thanks to Harry Potter. That Devil is named Censorship.


Read more about Banned Books Week, Get promotional classroom and library resources at their website: HERE 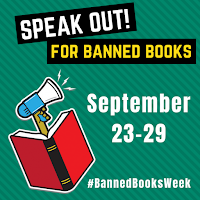