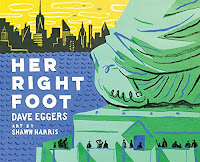 I'm going to talk about two books today that need to be on every classroom shelf ; I'm talking K-12, even though they are listed as for a younger crowd. The reason I want to talk about them BOTH has mostly to do with my own tardiness. When I read Her Right Foot

last fall, I was very, very, very remiss in not mentioning it because I so instantly adored it for so, so, so many reasons. Then, when the team of Eggers (writer) and Harris (illustrator) followed-up with What Can a Citizen Do?

, and Chronicle Kids sent me a copy, I knew I couldn't just talk about one without the other.

got plenty of love and I tend to shy away from writing about those books. I may love them alongside the masses, but my nature leans a supporter of the underdog.  Her Right Foot

was going to be fine. It was going to make it into lots of kids hands. All the kid lit darlings were talking it up. It did not need my little blog. And it was sort of overwhelming in it's educational possibilities. I'd have to REALLY offer some great teaching thoughts and there was the matter of finishing my doctorate that semester. So....yeah, excuse. 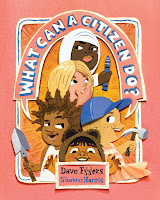 What Can a Citizen Do?

is releasing in two days and I've seen a smattering of glowing thoughts on it, though one was rather critical (more on that later). I didn't instantly love it the way I had Her Right Foot

, but by the third read, I definitely thought it belonged right alongside Her Right Foot

on every classroom shelf.

Subtlety is a foundational key in stellar writing for children and writers tend to lean way, way too didactic when they set out to write a "children's book," especially authors who typically write for an adult audience. Mr Eggers has done a fabulous reining-in of the adult-to-kid speak on two topics that could have very easily leaned toward didactic. Both books have A LOT to say about our American societal experiment and What Can a Citizen Do?

is even more subtle than Her Right Foot

, not only because clocks in at 40 pages versus 104, but because our current state of affairs defining citizenship in this country creates presuppositions regarding what the book MIGHT say in an adult reader's mind.

While Her Right Foot

is busy teaching kids facts about Liberty Enlightening the World (the real name of the Statue of Liberty), it is ever so subtly bringing home the message about her symbolism within the American experimental ideal of a diverse and welcoming society grounded in freedom and liberty for all. No preaching, no teaching about ideals of liberty, it's strength lurks quietly within the theme, whilst it goes about offering engaging facts (the absolute best way to teach kids).

What Can a Citizen Do?

is even more subtle in theme and I think that's why it took me a third read to fully ignore my adult expectations on what the book was going to be about, something the writer criticizing it over at Kirkus Review failed to consider. The writer over there missed the mark when s/he said it was, "opaque and painfully insensitive to America’s practiced definition of citizenship both historically and contemporarily, which denies the humanity of those not legally deemed citizens." I'm not going to lie; I did keep waiting for some treatise on the legalities of becoming a citizen in the USA - and that treatise never comes. But it is not "opaque" or "insensitive;" it's just not about what you expected it to be about. The writing isn't a statement on the fact that we should be letting everyone who wants to BE a citizen of the USA be one - that message is actually better themed in Her Right Foot

. The point lies in the theme that everyone, regardless of a piece of paper saying they belong, already IS a citizen and they can join and be part of something; they can have a voice anyway.

We have lots of children's literature on the immigrant experience and we probably need a new one to address the current immigration war, but  What Can a Citizen Do?

is not that book and expecting it to be so simply comes from our own expectations based on the current state of affairs in our country. If you look at the book for what it is: a group of citizens who work together to build a better space for each other, you see Eggers ignoring the current 'othering' that happens when we assign citizenship to a piece of legal paper. I actually find that subtlety fantastic and that's why I think it also makes it a K-12 book. The conversation a high school lit or social studies teacher could ignite with this book would be phenomenal!

(PS: You can send mea copy of Her Right Foot

Buy What Can a Citizen Do? HERE

Here's a couple videos you might also use in the classroom:

If you're looking to do an entire unit on this subject, I'll throw a few links to start, but honestly, just google it..... there are links and links devoted to these themes.

Here's a link to 19 Books about the Immigrant Experience in America (from the website Brightly).

Here's Amazon's list of best selling books on the subject of immigration.

Want to know more about the author? Here's his website.
I, like everyone else on the planet, have read and enjoyed his Pulitzer-nominated adult book, A Heartbreaking Work of Staggering Genius

. Literary types will also know that he founded McSweeney's Publishing. Children's literature looks to be a new venture for him and he sure started with a bang (seems to be a pattern with him).

Given no credit throughout this post is illustrator Shawn Harris. Here's his website.
I've said it before, I'm not an artist so I feel less inclined to discuss illustrators in my posts, but Mr. Harris deserves better than I can offer. Both books are done using an amazing paper cutting technique in a way that adds depth and movement to the page. This book would also be an excellent example of that technique for use in art classrooms!
Here are a few links discussing his technique: One Here and Another Here and Here