Once a Witch by Carolyn MacCullough - book review

I seem to be reading nothing but supernatural stories lately. First I read, Evermore. Then, Hush Hush. And now, I’ve just finished Once a Witch.

is the story of a teen witch….. and a cute warlock. It seems the prescription of late is girl + supernatural boy = better girl. I know Twilight

is popular, but c’mon!

But today I’m writing about Once a Witch,

not beating a dead Twilight horse, and Once a Witch

is a respectable young adult read, probably my favorite of the three. So, a fair shake is in order.

Tasmin is a seventeen-year-old girl born into a long line of witches. Unfortunately, Tasmin has managed to be the only one without a Talent. To escape family pressure, Tasmin’s managed to send herself off to a nice, normal boarding school in New York. Lots of teen angst ensues until the bad guy is injected into the story. Then, readers are in for a suspense-styled ride filled with nice bits of romance, humor and peril.

is a coming-of-age tale with a juxtaposed misfit protagonist. Tasmin is a strong voiced and likeable girl, surrounded by supporting characters that could have easily stolen the show. But though I loved the extended hodge-podge of witches, this is where my criticisms begin.

I’m going to say something in a positive review that I never thought I’d say: too much editing! Once a Witch's plotting is mostly solid, but the characters are filled with unexamined potential. This is nowhere truer than in the case of Tasmin’s love interest: Gabriel. The couple’s back-story is a well of unfulfilled dramatic possibility. Perhaps the sequel will offer the richness I so desperately sought.

Characterization lust aside, there is an enjoyable story in the pages of Once a Witch.

While reading, I was strongly reminded of one of my favorite stories: Practical Magic

by Alice Hoffman. I offer that comparison as the finest of praise.

from debut author Becca Fitzpatrick, is going to be snatched up by the Twilight-styled girls of middle and high school and might well fall into the hands of more than a few adult fans of the genre also.

I am not one of those readers. However, I was surprisingly drawn to Hush, Hush.

Synopsis: When high school student Nora Grey gets a new lab partner, it seems she’ll be doing all the work. A newcomer to the school, Patch seems more intent on playing pool than completing assignments. Yet, Nora finds herself attracted to the bad boy and begins noticing him wherever she goes. It doesn’t help that Nora’s recent feelings that someone is watching her have culminated in a supernatural-styled encounter or that Patch seems to know everything about her. Is Patch the bad guy he seems? Is he causing the strange occurrences in Nora’s life? Soon, Nora will learn that she’s caught in the middle of clash as old as the dawn of time.

is tightly written, with a good mixture of action sequencing and character development. Protagonist Nora is living in a setting where readers know something bad is looming: absent parents, distracted best friend. Additionally, she's part mystery detective, trying to figure out the good guys from the bad ones along with the reader. Bad boy Patch is Heathcliff reborn as an immortal. He’s not nice and can even be downright wicked. Against the brilliance of Patch, Nora seems a bit flat, but since this is the first in a series, Ms. Fitzpatrick has time to polish Nora.

follows the standard boy meets girl, forced teen angst and falling for bad boy themes, it also holds readers rapt. There’s always a concern that poor female decisions at the hands of a cute boy stories will venture into the subjugation realm, but it doesn’t eliminate the fact that many, many teen girls love this sort of thing. Call it hormones or the first bloom of love, assign it any name you’d like, teen readers of the Twilight vein will enjoy this one.

The International Reading Association has posted the second draft of the revised Standards for Reading Professionals. I was lucky enough to graduate from a university with strict adherence to these reading professional standards. In fact, I'm there now working on my PhD!

Current reading teachers, students, prospective students and just about anyone with an interest in what reading professionals have to know might spend a few moments perusing the 92 page document. After reading the second draft, there's a survey that will help shape the finalized standards.

Why the New York Times missed the point

I've written a commentary over on Examiner discussing the dust up over the New York Times article on students self-selecting reading materials.

Basically, I'm worried that in all the tweeting and posting and hip-hooraying over letting students choose their own books, we miss two important points:

1. Most reading educators use a form of self-selection already and without proper training, the Reading Workshop method lacks the sound educational foundation to TEACH someone how to read and write well.

2. The bigger issue is in the prescriptive nature of the current educational climate.

By squabbling over an old-news-method, that almost every teacher I know uses to some effect, we are missing an opportunity to promote the discussion of topics concerning the loss of professionally trained decision-making for our students.

There are three ways of examining Cleopatra's Daughter. One might view the story as an overlooked appendage to the famous story of Marc Antony & Cleopatra. One might also marvel at the novel’s historically significant timeframe. Or finally, one can view Cleopatra's Daughter as an engrossing story of political intrigue and romance. Choose any direction; you will not be disappointed.

opens as Octavian of Rome has conquered Egypt. Marc Antony and Cleopatra have committed suicide, leaving three orphaned children. Octavian decides it wise to keep the children alive for future bartering, especially in view of their being the remaining heirs to the throne of Alexander the Great. As the three children set sail for Rome, readers join the perilous journey that will follow the first-person narrator, daughter Selene, to adulthood.

is one of those first rate historical fiction novels where the strong setting is merely a footnote to the story of the people. While the reader is busy falling in love with the characters, she forgets all the rich culture and historical fact, only later to contemplate the significance and wonders of an epoch in both Egyptian and Roman history.

Because it is a coming-of-age tale, Cleopatra's Daughter

works for both adult and young adult readers. While Cleopatra's Daughter

definitely has the chops to hold an adult readers attention, especially those of us who love historical fiction, it is the strong voice of Cleopatra's only daughter, Selene, that makes Cleopatra's Daughter

an excellent choice for teens searching for a tale rich in both history and romance. The Latin and Greek wording is kept to a minimum and the author provides support with both an opening cast of characters and a glossary of terms and author’s note at the tale’s end.

Teachers in high school might well recommended this tale to students interested in the historical context of the novel or those seeking more than the supernatural love stories of late.

is a boy without a past. He was found inside a bank vault at the age of six and now lives with the Wilomas family, basically acting as their servant. They all live in the town of Dunce where no magic or gnomes are allowed. Bran is a unique boy with powers he doesn't understand and a past he'll soon have to face.

prologue begins in the past as Bran’s mother magically sends him away from a scene of death and violence. The story begins quick, with the promise of an action-filled tale. We’re uncertain as to who is good or bad and we gather that we’ll be figuring that out along the ride. Chapter one switches to the modern day where Bran Hambric is living with the Wilomas family. When a burglar tries to invade the Wilomas home, Bran and the eccentric Mr. Sewey Wilomas stake out a trap.

However, this encouraging opening quickly begins to wander. Until part II, at page 123, the interesting story is a bloated look at an angry family of unappealing and stereotyped characters. But, if readers can hang in there until page 123, Bran Hambric: The Farfield Curse

returns to its action-filled promise. There’s a good deal of foreshadowing and some new, and finally interesting, characters introduced. Bran begins to learn about himself and the story begins to follow a more traditional bildungsroman format. The premise is an interesting one, with a few well-done literary devices, like the use of the overheard conversation and repetitive language used to good effect. It would be remiss to ignore the obvious borrowings from Harry Potter, but perhaps this is not a fault of Mr. Nation so much as a characteristic of the next generation of writers who’ve devoured the series and encapsulated the masterful Rowling stylings in their own writing.

Still, there’s really way too much running around in Bran Hambric: The Farfield Curse

that leads to nowhere. An editor could have alleviated this with a sharp pen that cut much of the extraneous garble mucking the tale. The freshman effort of Bran Hambric: The Farfield Curse

shouldn’t take away from the possibility of Mr. Nation’s future odds. He has some good ideas (see more about his Twilight guy site below); he thought up a good story. With a few more writing lessons and an editor with a mightier pen, he’s certainly got the potential to offer a better sophomore effort, be it a Bran Hambric

sequel or a new idea waiting to pop forth from this wunderkind.

seems suited for strong readers who are willing to stay with a long-winded fantasy tale. Reluctant readers could lose focus and have difficulty with awkward wording and redundant content.

Read more about the book on the Bran Hambric website.


Publisher Giveaway:
BUY the book BEFORE 9/9/09 and WIN!-- (US ONLY) Any person who pre-orders Bran Hambric: The Farfield Curse, and sends their e-receipt or scanned receipt to sbpublicity@sourcebooks.com will be entered into a drawing to win one of the following prizes:
- Personalized first-edition copy of The Farfield Curse (give your copy to a friend!)
- Personalized early reader copy of Book 2
- Personalized Bran Hambric poster
- Half Moon Necklace
- Signed CD of soundtrack
- $25 gift certificate to local bookstore
- Kaleb Nation event at local bookstore (fall 2010)
One entry per book ordered (so as many entries as books ordered). Receipts must be dated prior to pub date – September 9, 2009 and bear the subject heading “Bran Hambric Pre-Order Competition.” Winners to be announced September 30, 2009!

Kaleb Nation a blogger of some notoriety. He's been featured in Entertainment Weekly, Business Week and on MTV for his blog Twilight Guy. He began writing Bran Hambric: The Farfield Curse 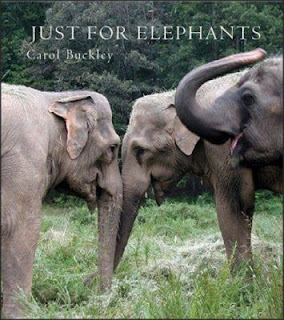 I don't usually go into the personal realm on Reading Rumpus as I consider this a professional site where teachers and parents can find good books and reading ideas. However, when Travels With Tarra

and Just for Elephants

came to me from publisher Tilbury House (a publishing house I’ve had happy experiences with before), I felt a need to explain why I was so touched by these titles.

Those of you who know me personally, know that my daughter is currently in veterinary medical school, so the subject of animal care and protection