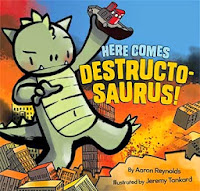 Author Reynolds has been featured on Reading Rumpus three times before (here, here, and here) for his Joey Fly Private Eye

books. They are intended for an older reader, but have the same snarky, intelligent humor as Here Comes Destructosaurus!

Publisher's Synopsis: "Watch the unstoppable destructive force of a raging temper tantrum! Tremble at the enormous mess and disrespectful roaring! Despair as no amount of scolding can stem the heedless fury! Someone is heading for a time-out, Mister! Anyone who has witnessed (or been) a toddler in the throes of a full-blown fit will delight in this clever book's moviemonster rampage, and may just come away from it with a bit more sympathy for toddler and caregiver."

My Thoughts: In homage to Godzilla, this fun book about temper tantrums will make both kids and parents laugh. The illustrations are bright and black-lined comic style. Everything about this one screams fun. A cute ending joke sets it up for a possible sequel.

Planet Kindergarten by Sue Ganz-Schmitt with illustrations by Shane Prigmore 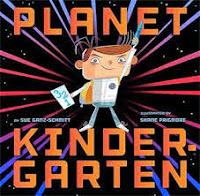 I had originally planned to include Planet Kindergarten

as part of an earlier picture book compilation post, but when I got halfway through it, I got all excited about a teaching idea for this book.

Here's what the publisher had to say, first: "This clever picture book will prepare young explorers to boldly go where they have never gone before: Planet Kindergarten. Suit up for a daring adventure as our hero navigates the unknown reaches and alien inhabitants of this strange new world. Hilarious and confidence-boosting, this exciting story will have new kindergarteners ready for liftoff!"

My Thoughts: What if you decorated your kindergarten room like Planet Kindergarten

? You could label things the way the main character describes them ('commander' being the teacher, lessons for the day are 'flight plans,' 'crewmates' instead of classmates.... it can go on & on). Considering I live a stone's throw from Kennedy Space Center, and NASA is a huge part of our student's lives, I am bursting with ideas for how much fun this would be! I got the idea about halfway in, when the protagonist was napping under a sea of stars hung from the classroom ceiling.

I don't think I will ever teach kindergarten, but this book sure made me want to (for just a second, anyway). Great illustrations, a funny (inside, sort of) joke,  and a calming story that lets reluctant kindergarteners know that they'll be safe on their home planet soon. 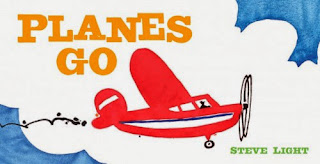 is part of a wonderful series of board books. I was only able to see a copy of this title, but the other books in the series include: Trucks Go,

Publisher's Synopsis: " The helicopter goes, "PITTATATATA PITTATATATA PITTATATATA." The jumbo jet goes, "Wheeeeeeeee VRRRRRRRRRRUUUHHHHHHHHHMMM." The propeller plane goes, "HUK HUK HUK WHIRRRRRRR WHIRRRRRR." Prepare for liftoff with 8 exciting aircraft and the noises they make in this irresistible board book! The long, oversized format lends itself to the shape of the vehicles and stands out on the shelf, and the boisterous text begs to be read aloud."

My Thoughts: LOVE this little book. Perfect for preschoolers. It has an odd shape, is great for practicing sounds and ends with a really big bang. If I ever get a grandkid, all of these books are on my list for sure. Don't let the 'boy' theme fool you. Little princesses will enjoy these too! (Check out the Let Books Be Books! campaign!)

Email ThisBlogThis!Share to TwitterShare to FacebookShare to Pinterest
Labels: Board Books, Picture Books

Chronicle picture books in all shapes and sizes!

Who doesn't love picture books?  Kindergarten uses them for read alouds. First and second to teach reading. Intermediate to teach writing. Struggling readers can practice reading to younger kids with them. And cuddle time with a picture book is just about the best thing in the world....

Here are a collection of picture books, all published recently from Chronicle Books:

Publisher's Synopsis: "More adventures await The Bear's Song's Little Bear and Papa Bear. When the bears seek warmth from their chilly perch atop the Paris Opera House, Little Bear is mistaken for a toy bear and whisked away . . . to a tropical island! Papa Bear sets out on a frenzied journey to find Little Bear, traveling to a bustling wharf, beneath a sea brimming with coral and mermaids, onto a busy beach, and all the way to a sun-drenched island. As in The Bear's Song, Little Bear is featured in every spread. Will Papa Bear—and the reader—find him? Children and parents alike will savor Chaud's lush, detail-rich illustrations and the sweet story as well as the book's bonus seek-and-find elements"

but now I want to!

Other than my occasional Serendipity post, I'm not one of those bloggers to regularly have "feature" days.  Don't get me wrong, I like the whole Nonfiction Monday, Poetry Friday, Throwback Thursday idea, I just can't get myself to promise to a "day." Stuff happens.

But for a long time, I have been disappointed that I haven't had time to write about certain titles. I will see them looking at me from the shelves and think, "Oh, I'm so sorry. I should have told more people about you." So... I'm going to try to mention some of my favorites more frequently.

Now, I don't expect to have time to do a proper review with an educational slant (my shtick), so I will label these posts "Book Bite" (I like alliteration). Just know, if I write a Book Bite about it, then it is one that has stayed with me for the ages.......

The Teacher's Funeral by Richard Peck

May the 4th be with us all today

It is May the 4th!
A holy day for us Star Wars geeks!
#maythe4thbewithyou

Here's where you can find some fun: