Who wants a Coraline cupcake?

(Death By Cupcake's Flickr pool via Cupcakes Take The Cake)

More on my 21st Century rethinking of what reading/writing means soapbox: 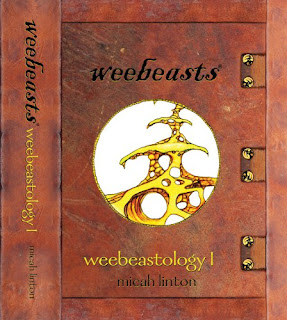 When the three volume Weebeastology

arrived in my mailbox bearing this critter:

I was a bit surprised.

No, I didn’t mind his cute, little tushy; I was taken aback by the fact that I was a reading teacher being asked to evaluate books without any words. Many moons ago, before I took up the cause of the secondary struggling reader, I used wordless books for teaching story-telling and writing. Wordless books are especially helpful with language acquisition students and pre-operational children. For older children, wordless books offer a natural look at story structure (story mapping), elements (dialogue, sequencing) and development (character, plot). Many English-Language Arts teachers love wordless books.

that arrived with the little, captured, yellow beast is a colorful and lucidly drawn three-volume set that easily engages the imagination. It’s part of the larger Weebeasts series chronicling the anthropological discovery of mythic, surrealistic, and naked (of course – how else would beasts be?) creatures. Mr. Yellow Weebeasts' tag says, “ An ancient species has been discovered by explorer Micah Linton. Follow the weebeasts with the book series as their epic journey unfolds with adventure around every corner.”

Micah Linton probably didn’t know that he’d be sending his big idea off to a woman with a vested interest in anthropology. Oh, he probably thought, “here’s this reading blogger who might like my little tale about the discovery of the weebeasts,” but he had no idea that in a brief two months she’d be watching her son, who has changed his major five million times, graduate with the intent to go chase weebeasts of his own.

Still, even though I love, love, loved the anthropological slant, I wanted something tangible to say here other than, “colorful, lucid, sparks the imagination.” So imagine my surprise when, two days later, another book arrived. And it had words!

is the second in the weebeasts series. And though I wished I’d seen the Weebeasts exile (which I presume happens in book one), I enjoyed watching the weebeasts find a new home and learn from past mistakes. Weebeasts: Plight

offered the same vivid illustrations and a nice story with many opportunities for discussions on friendship and tolerance. The story also manages to pull off the target lesson without too much preachiness, a deal killer for this reader.


I enjoyed Weebeats and could easily see it growing into something big. But, despite its extremely well done self promoting, I couldn’t help but wish Mr. Linton had secured a book deal with a major publisher. I can see the weebeasts idea going the way of Christopher Paolini's fairytale ending, if just for just the right publication house. The weebeasts idea is so clever, it deserves bigger promotion and I’m happy to do my small, small part.

GIVEAWAY:
On March 2nd, in celebration of Read Across America, I'll be giving away my first edition copy of Weebeasts: Plight, the three volume Weebeastolgy and naked, yellow, butt-tattooed weebeast in his little brown bag. ☺

For one entry, leave me a comment about your involvement with children's literature. Are you a teacher? a librarian? a parent? Or someone who loves kid lit?

Micah Linton is a video game designer/artist and writer. You can find out more on the weebeats website or on his personal page.

Jeffrey Townsend, Hollywood filmmaker and director of Patrick Carman's 'Skeleton Creek,' will be hosting a Live webcast event Monday, Feb 23rd - 4:30 PM (PST). I sang the praises of this unique novel a few days back and thought some readers might be interested in this event.

Email ThisBlogThis!Share to TwitterShare to FacebookShare to Pinterest
Labels: Fun

On The Reading Is Awesome Front:

The Future Is Knocking.... Cybils, Blogs and New Media

So the Cybils winners are finally announced and they easily illustrate the influence the blogging world has on literature. Not just kid lit, but all forms of print media are feeling the pressure. Newspapers and magazines are closing their doors, more and more people are getting their news and information from the www.

See, there is both a place for high-brow Harold Blooms and a place for us lowly M.S. in Reading folks who simply love books. We don't want to be Maud Newton (well, maybe a little). We just want to spread our love of children's literature. We don't mind getting some free swag, but we'd write and talk about books no matter.

It's just another rung in the changing media world, but when I look at the quality of literature epitomized in the Cybils choices, I can't help but feel a small victory for kidlitospheredom. I remember when cable TV trespassed on the big three. Everyone said cable would be the end of public television, but we simply have more choices now. We can watch PBS (Harold & Maud's channel) or we can watch HBO (who says the Sopranos were low-brow?).

And when I look at the Cybils winners, I see dedicated children's literature lovers changing world media. One post at a time.

Lincoln Through The Lens: How Photography Revealed and Shaped an Extraordinary Life by Martin W. Sandler - Book Review

As I read Lincoln Through the Lens: How Photography Revealed and Shaped an Extraordinary Life

, I vacillated between personally loving the story of Lincoln and educator evaluating the book’s efforts. There is no doubt the story of Lincoln is engaging and now, between President Obama’s respect of the man and Lincoln’s looming 200th birthday, books seem to be springing forth like weeds. With limited funding, how do we tell the flowers from the weeds?

The slant Lincoln Through the Lens

takes is that Abraham Lincoln was savvy enough to manipulate the media through the technology of his time: the photograph. For the most part, this premise is believable, but history is a speculative art and the extent of Lincoln’s vision can only be known through his accomplishments. The photographs are the stars of this book, but the text holds some interesting tidbits that are sure to please even those who think they know Lincoln. My Lincoln appreciating self really enjoyed Lincoln Through the Lens

But my reading educator self is always present, especially when evaluating nonfiction text, and since my background is peppered with struggling readers, I am especially critical of texts lacking in support devices. While I read Lincoln Through the Lens

I kept asking myself if it would be engage a secondary student and I’m not certain that I got a clear answer.

The text is nonlinear, but the purpose is to discuss the importance in the photographs, not the tale. The illustrations, coloring and font all seem to be carefully chosen, but textual clues in the form of graphs or charts might have enhanced the experience. Foremost, it’s always unfair to evaluate a book about Lincoln because no book will ever fill the shoes of the man’s own language.

For the most part, Lincoln Through the Lens

is a good source for research reports and I suspect photography buffs would especially enjoy Lincoln Through the Lens.

Recommended for secondary libraries, but not necessarily classroom purchases.

Email ThisBlogThis!Share to TwitterShare to FacebookShare to Pinterest
Labels: Nonfiction

I love fairy tales, collect them in fact, but Pinocchio

had never piqued my interest. When Library Thing offered a new translation with a forward by Umberto Eco, I bit. Wasn’t it time I read this classic?

begins his journey as chunk of wood with a psyche. He progresses through the stages of development most soul-filled beings progress and encounters the same obstacles. Though its been analyzed by varying angles, I felt Pinocchio was, as Eco also saw, a bildungsroman, following Pinocchio

's growth from his infantile form (wood) to his matured state (boy).

The story itself is a glimpse at the ferocious world of childhood where everything is tempting and dangerous. It uses elements of fantasy in an allegorical manner, jumping from extremes of preachiness to ridiculousness. It warns against our darkest nature and praises kind spirit.

wasn’t shocking or new, I’ve read my share of violent children’s tales and was certainly familiar with the plot, but it was less than I imagined it to be considering its literary standing. I pulled another translation from the shelf to compare and I found little difference in the erratic and overly incompatible story. Others have said this might be a result of its originally having been a serialized tale; I felt it was simply a poorly written jumble.

I’m glad that I can add Pinocchio

to my have-read list, but I don’t think it’s a fairy tale I’ll be returning to again and again.

3 stars only in deference to its status as a classic.

Carlo Collodi is the pen name for Italian children's writer Carlo Lorenzini. There is a park, Pinocchio Park, located in Italy dedicated to puppetry and children's literature. You can read more about Carlo on his National Foundation website.