2013 Newbery: The One and Only Ivan by Katherine Applegate

Today was one of those days. I got up early to make a casserole for a work luncheon. I hit the snooze button three times. I had to skip the shower so my hair was kind of greasy (ponytail day!). The minute I stepped out of my car a teacher stopped to ask me a favor. I had 20 students to test so I had to start-up all the computers (Monday), log-in with the "secret" account and load the test website on to each of them. I barely made it as they walked through the door. As the last student left, I could hear my office phone ringing. It was time to work on the School Improvement Plan. After an hour laboring over the 50 page document, I had a collaboration meeting with a teacher to look over her curriculum for the next quarter. I ran out of there to heat the casserole and sing Happy Birthday to my boss (and one of my best friends). After the clean-up, we returned to the School Improvement Plan once again and finished it just as I realized that I hadn't sent the testing schedule out for tomorrow. I ran to my office, typed the schedule at lightening speed, and sent it just as the dismissal bell rang. As I walked to my car, I thought, "Oh! Today was the Newbery announcement!" But my phone rang, it was my aunt, discussing 'family' stuff and then my son beeped in and then I was home. My mother and husband were waiting with hungry eyes.  Hoping to get out of cooking dinner, I told them that I had a tummy ache (I didn't share that it was probably because I had eaten a big slice of birthday cake). As my husband offered to make dinner, I remembered, "Oh! Today was the Newbery day!" I grabbed the phone and nearly passed out. 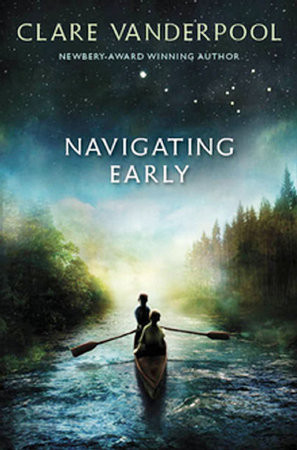 Publisher Synopsis:  At the end of World War II, Jack Baker, a landlocked Kansas boy, is suddenly uprooted after his mother's death and placed in a boy's boarding school in Maine. There, Jack encounters Early Auden, the strangest of boys, who reads the number pi as a story and collects clippings about the sightings of a great black bear in the nearby mountains. Newcomer Jack feels lost yet can't help being drawn to Early, who won't believe what everyone accepts to be the truth about the Great Appalachian Bear, Timber Rattlesnakes, and the legendary school hero known as The Fish, who never returned from the war. When the boys find themselves unexpectedly alone at school, they embark on a quest on the Appalachian Trail in search of the great black bear. But what they are searching for is sometimes different from what they find. They will meet truly strange characters, each of whom figures into the pi story Early weaves as they travel, while discovering things they never realized about themselves and others in their lives.


My Thoughts: I am a character driven reader. I can forgive many writing flaws, but if I can’t get inside the character’s mind, I am out. At first, Jack, the overly-introspective protagonist, left me unaffected. He is pretty much a ‘normal’ thirteen year-old boy. Sure his Mom died, his Dad’s distant and cold, and there’s ‘something more’ lurking about his mother’s death circumstance, but those are life situations, not personality. When Early enters the story, he steals the show. His double entendre name is only a small part of his appeal because Jack does, in fact, have to learn how to navigate Early. He’s quirky and brilliant, filled with hope and wonder. His stories are intricate foreshadowing marvels. He makes Jack more interesting. Just like many we meet make our lives richer; Early will change Jack’s life for the good.

And Early will change Jack’s life not because we can now put a label on his special uniqueness, not because we can diagnose and pigeonhole him, not because I can utter the “A” word and all sorts of preconceptions will spring to mind, but because of the interactions between the boys. So many children’s books are being written to illustrate labeled, perceived disabilities when we should be looking at the characters, and by greater measure human experience, through their singleness. Giving names to Early’s quirkiness detracts. I haven’t seen a finished copy, as I read from an advanced one, but I hope the Author’s Note has been excluded. It detracted from the story's beauty, was unnecessary and took some of the polish off of Early’s glow.

And glowing is one way to describe Navigating Early's

powerfully built setting which creates a beautiful, yet lurking, unknown to the tone and pacing. The picturesque Maine wilderness is a perfect location for the era in which Jack and Early make their adventure. Vanderpool has used the same vivid brushstrokes that earned her a Newbery in Moon Over Manifest

and given ELA teachers an excellent title to instruct mood/tone.

All in all, it may be that Jack’s a bit too adult-like, the topics are a bit too weighty and specific situations may tie up in a bit too tidy bow, but Vanderpool pulls is all off magically with her story building skills that will leave readers sighing when they close the last page.
Strongly Recommended for elementary and middle classroom and library purchase.

Genre: Historical in setting, Adventure in plot
Age: 10 and up
Pages: 320
Themes: difficult relationships, loss, grief, friendship, life’s journey and the power of faith
Character Development: Excellent, good first person narration in Jack and great, fantastical stories told by Early
Plot Engagement: Tad bit slow to start, faster once we get to know Early
Originality: Not unique, but strong enough elsewhere to not matter
Believability: At first it is hard to see where Early's stories are headed, but once we learn about his connection to the Fish, we start seeing them in a different light
Thank You to the publisher for my advanced copy
Publisher: Delacorte Books for Young Readers
Release Date: 01/08/2013
ISBN 13: 978-0385742092
Buy Navigating Early Here

Supporting texts would include:
Investigations, both mathematical and scientific, on pi
WWII and era oriented synopses
Appalachian Bears and Timber Rattlesnakes
Comparisons of Maine and Kansas
Rowing crew
The Appalachian Trail

. She lives in Kansas with her family. She did lots of jumping up and down in January of 2011. You can read more about it on her website.

I don’t do negative reviews. I subscribe to the John Updike school of thought on reviewing. However, I am going to write about a book that I didn’t really like. I am going to write about it because the author is a big deal and I like his other books. Besides, my little review isn’t going to hurt his superstar status. He has won a Newbery and trumped it with a Newbery Honor. I liked his other books so he gets a pass for Hokey Pokey.

Hokey Pokey is a western-styled amusement park of a place where kids ride the range on wild bicycles and where adults don’t exist (except the Hokey Pokey Man who doles out treats). Kids play, watch cartoons and generally do whatever they want. But one day our protagonist, Jack, wakes to find that his bicycle has been stolen by a (gasp) girl. During the search for his beloved bike, Jack begins to notice changes that lead toward his leaving Hokey Pokey. He will learn that it is okay to grow up and leave childish things behind.

Spinelli has once again formed a well-written tale. It is visually descriptive, filled with symbolism, invented language and recollections of Peter Pan. However, I have some issues. Hokey Pokey is not only needlessly abstract; it is didactic. It is way too metaphorical for his intended audience (not us adults, folks). It has a nostalgic feel to OUR childhoods, but I don’t think it represents most of the 2013 children’s desires (would it have been that hard to throw in an X-Box?). In the end, I think Hokey Pokey will be recommended by adults who like children’s literature, but I can only guess which kids will pick it up unprovoked. My guess for our middle school library? Dust gatherer.

Jerry Spinelli has been many things in his life. He doesn't care if you call him a writer or a grandpa (he has 21 grandchildren!). You can learn more about him on his website.

I am already sick of resolutions.

For many years I joined the resolution party. Diet & exercise, read more, give more, laugh more, write more.... Today's bundle of rss feeds were all about resolutions. I am already sick of resolutions. Day one & done.